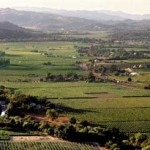 Our Vitis vinifera winegrapes find Sonoma County and Dry Creek Valley to be well suited to the production of premium wine. The coldness of winter and warmth of summer; the many varieties of compatible soil types; and the influence of fog following the Russian River into the valley create a ideal growing environment in our vineyard for our grapes.

A cold winter provides enough chilling units to allow the vines to slumber while dormant. A warm spring and dry summer allows the vines to drink well from spring rains to help produce the leaves that fill the VSP canopies while slowing the vines at veraison to allow the vine to focus on the task of ripening the grapes. Fog during the summer slows the ripening process to allow for the gradual expression of very fruity flavors and aromas.

We work in the vineyard to ensure the best combination of grape clusters to overall leaf area. Balancing cover crop and/or clean soil to rootstock efficiency and water availability is vital. Throughout the growing season we constantly evaluate vine nutrient status and overall vine health.

These are the same grapes that we use for our own custom crush project – so you know we grow the best grapes we possibly can!

OUR FOCUS IN THE VINEYARD

A YEAR IN THE VINEYARD

Vine Structure Decisions: We begin pruning after harvest in December. The grapevines developed the buds for this year during the previous growing season. This buds will grow shoots that will set fruit that depends on the overall health and vine microclimate the buds experienced. Typically, heavily shaded canes will develop less fruitful buds. Our goal during pruning is to establish the structure for the growing season. Our VSP trellis system guides our bi-laterally trained cordon arms along a wire. This cordon has multiple “spurs” that were shoots the previous year. These spurs provide the buds that will be this years shoots. Because these shoots may have multiple “canes” from last year, they need to be removed to one spur with two or three buds for this year. Making this decision now reduces the number of unwanted canes that need to be removed later! Pruning takes our permanent crew three months to complete.

Budbreak heralds the opening of the buds and the beginning of leaf development. These tiny plant structures are particularly susceptible to frost, wind and hail damage, so we anxiously wait through this period and hope for no damage to the tender shoots and clusters!

Winegrapes are self-pollinating so no bees needed BUT weather is important. Cool, rainy and/or windy weather can delay bloom.

The culmination of all of our efforts to produce flavorful winegrapes!